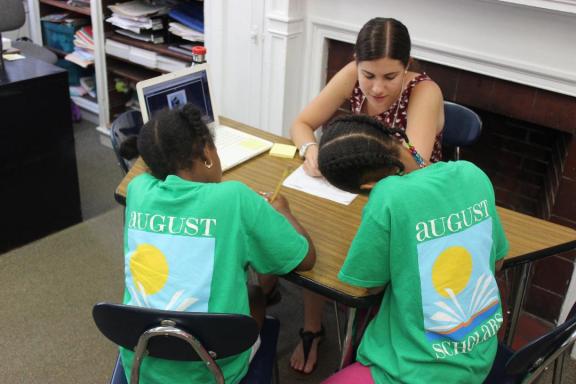 “It used to take a whole lot of work on our end,” Justin Hajj says of finding the right students for August Scholars, a three-week summer program that combines academics, enrichment, and a personal approach that makes it easy for kids to achieve meaningful success.

The program is designed for children who can benefit from summertime academic support to avoid summer learning loss. In the morning, students focus on school work. Afternoons are devoted to fun: art, technology, and in recent years a drumming program. To measure impact, the program does pre- and post-program testing.

To recruit kids, August Scholars staff would visit schools and encourage parents to follow up. They would explain that the program was free. But often, that wasn’t enough, Hajj adds. He’s the Upper Division Head & Director of Advancement at The Learning Project Elementary School where August scholars is based.

Now, August Scholars staff just talk to City Connects coordinators who already know which students would be a great fit for the summer program. If a family doesn’t have an email address, that’s no longer a problem because the coordinator can reach out to parents.

Now 50 percent of the students who are enrolled in August Scholars come from City Connects schools.

“We value the coordinators’ contribution and partnership,” Lane Dussault, August Scholars’ Program Coordinator, says, explaining that coordinators come observe in the summer to see the program and the kids in action. And during the school year, coordinators share information with August Scholars about how the kids are doing.

Victoria Eells Lutas, the coordinator at Boston’s John F. Kennedy School says, “For the summer there are a lot of great enrichment programs, but teachers and families are often looking for a program that will target academics.”

“Teachers have given feedback that students who have attended the program have grown in their reading over the summer. We usually expect to see summer slide, so when kids come in several levels higher we know it’s an effective summer academic intervention!”

And, Lutas says, the students love it. “The kids don’t seem to realize that it’s actually an academic program at all! One of them said that it’s ‘like school, but way more fun than school.”

“Parents are happy that their kids like the program. They also love that it is free and focused on academics.”

In addition, Lutas explains, August Scholars has increased accessibility for Boston Public School students by providing buses from Roxbury and Dorchester, which has helped families follow through on enrolling their children in the program.

This is a classic example of how City Connects gets the right services to the right child at the right time. Coordinators build relationships between schools and community organizations that make it easy and systematic for programs to find the kids they are set up to serve — and for kids to get access to the best available resources.