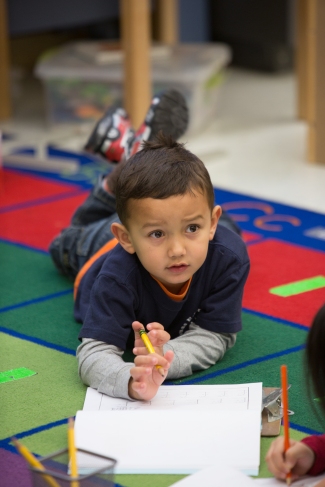 As City Connects expands in Indianapolis, Ind., we’re learning more about the power of local innovations.

“I learned about City Connects years ago when I implemented this program in Springfield, Ohio, at a pre-K to 12 Catholic school system,” Dr. Ken Britt says. He is the Senior Vice President and Dean of Klipsch Educators College at Marian University. “I wanted to bring the program to Indiana because I believe that, coupled with our focus on teacher and leadership development, comprehensive student support can be a game-changer for young people. And there is no better program than City Connects.”

Frequently, school districts pay for City Connects using their own funds. Other districts have philanthropic partners who pay for some or all the costs. Indianapolis is unique because it’s the first district to use state funds. The Klipsch Educators College applied for and won a grant from Indiana’s Family and Social Services Administration, funding that was allocated to address students’ social and emotional needs.

City Connects has now been implemented in three Indianapolis-area schools with coordinators serving at all three locations:

• Cold Spring School, a K-6 magnet school, where the coordinator works in all the grades

• Enlace Academy, a K-8 charter school, where the coordinator works in grades K to 4; and

• North Wayne Elementary School, a K-6 public school where the coordinator works in grades K to 3

The coordinators have been working quickly, conducting whole class reviews and getting to know their schools, according to Jeanette DeBruhl, the Program Manager who supervises the three coordinators.

One powerful feature of the whole class review, DeBruhl says, has been, “Giving teachers the opportunity to really talk about all the kids in their class.”

The coordinators have also been setting up new programs and developing partnerships with community organizations that provide crucial services and enrichment for students.

At Cold Spring, the coordinator set up a program that was the brainchild of one of the school’s sixth graders. It’s a peer mentoring program in which sixth graders act as mentors for third graders, discussing topics such as bullying and how to be a good friend. The third graders get support. And the sixth graders have the opportunity to be leaders in their school.

At Enlace Academy, the coordinator helped with International Night, an event that 100 families attended. The coordinator invited a number of community partners to attend so that families could connect to these organizations, including the local Salvation Army which helps families with food, shelter, and transportation.

At the North Wayne School, the coordinator brought in Angels and Doves, a national organization that ran an anti-bullying program at the school. The program included a visit made by cheerleaders from the Colts, the city’s National League Football team.

Other community partners include, the YMCA, Girls, Inc., Girls on the Run, and the Lions Club.

Britt says this work has had a powerful impact:

“First, every student is being impacted. That’s very powerful and it’s very important. The second piece is the connection with the agencies in the community. You have schools that say they need more help. You have agencies that say, we can’t get in the schools to help.  So, the coordinator is the broker among the agencies to support the kids. Schools shouldn’t recreate professional services that already exist among professionals in the community.”

The partnership with Marian University also brings benefits. DeBruhl and the three coordinators are all employees of Marian. And being part of the campus community allows them to meet with university faculty and staff for professional development. In addition, a group of 40 Marian undergraduate students who are studying to be teachers volunteer as tutors and mentors at Cold Spring and Enlace Academy. And Marian makes monthly reports to state officials about how the City Connects program is working.

Representative Robert Behning (R-Indianapolis), has also seen the value of City Connects. Behning is Chair of Indiana’s House Committee on Education, and he recognizes the importance of student support for every student. He spoke at a national conference on integrated student support hosted by the Center for Optimized Student Support at Boston College’s Lynch School of Education and Human Development. And Behning recently told us that:

“City Connects is a critical partner in helping students learn, especially those from low-income families. Every child faces unique challenges, but some need additional support. This organization brings together a community that engages children at every level and helps them succeed in the classroom. Indianapolis students are being well-served by City Connects.”