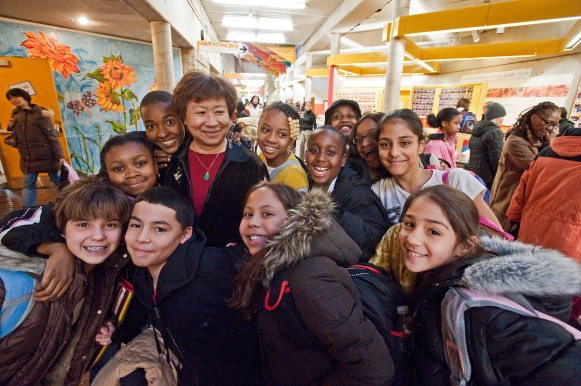 One factor that makes City Connects so powerful is its fidelity system.

This is the work of ensuring that the City Connects model is implemented consistently in all the schools across the five states where our Coordinators provide integrated student support.

“When City Connects began to expand into new cities and states, we identified the need to be able to measure whether City Connects looked the same across all our sites,” says Jessica Petrie, the Continuous Improvement Specialist at City Connects.

Based on the research of the late Carol T. Mowbray, a professor of psychology and social work at the University of Michigan, the City Connects team drew on the City Connects practice manual to devise a fidelity system that was rolled out to the field four years ago.

The system looks at seven core components of the City Connects practice:

• the work coordinators do when schools open in the fall

• how family partnerships are promoted, and

“Within each of the components, there are facets, the subsets of tasks that need to happen in the larger buckets of the core components,” Petrie says. For example, what steps do coordinators have to take before, during, and after the process of conducting whole class reviews.

Within each facet are indicators, the actual measures of what coordinators have done. This might be a yes/no item on a checklist or a statistic about how many students have received services.

“It’s been a really helpful tool for deepening the practice, and it is a mechanism for monitoring that City Connects is being delivered as intended in the ever growing network of schools,” Petrie notes. The fidelity system also helps City Connects engage in an on-going process of continuous improvement.

Essentially, the fidelity system is one of the ways that the different parts of City Connects always talk to each other.

“One of the strengths of City Connects as a whole is that it’s a research-based practice and research-driven. We are continually interacting with the field and using what we learn to maintain and improve implementation” Petrie says.

“The quick turnaround time between fidelity data collection and reporting back to the practitioners is gratifying. The strong research-to-practice connection at City Connects is a clear strength of the intervention.”