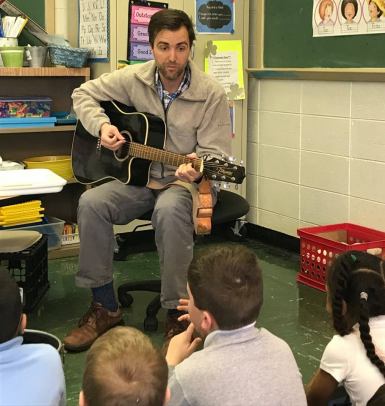 At Catholic Central Elementary School, in Springfield, Ohio, where City Connects’ Coordinator Josh Richardt works, he tells students in pre-k through fifth grade, “I am so glad you’re in school today.”

There is also a sign hanging in the hallway that says, “You belong here.” 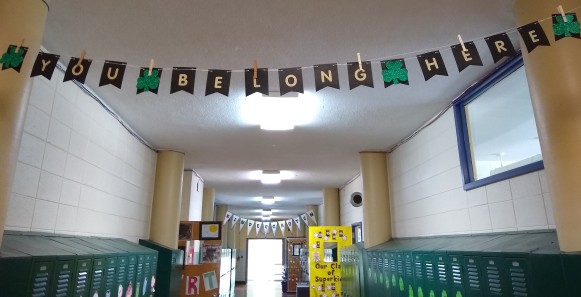 These messages weave students, especially new ones, firmly into the school’s fabric. And they build on a key finding from the developmental sciences: Relationships matter.

At City Connects, we build relationships, in part, by getting to know students through whole class reviews, a systematic, evidence-based process of assessing every students’ strengths and needs. 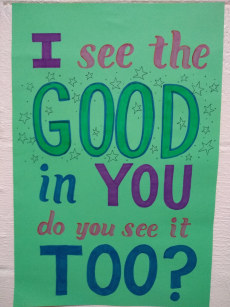 But coordinators also weave together the science of relationships with sociability.

Right now, for example, Richardt is deploying a, multigenerational, relationship-building tool with the new kids in his school called “having lunch.”

He invites students to bring a few new friends that they’ve made to his office to eat lunch. It’s a chance to chat, listen, and see kids interacting. Later, Richardt calls children’s parents to say hello, mention the lunch, introduce himself as a resource, and report on how their child is doing.

“Parents are surprised,” Richardt says, “because they realize there isn’t a problem. I’m just calling to check in. I’m setting the groundwork for the role I can play with the family later.”

This school year, Richardt’s school has a large group of new students, including a number of children from Venezuela.

Some of Richardt’s relationship building happens casually, in the hallway or at other chance moments. He focuses on meeting students, especially the younger ones, at their eye level.

“Sometimes I’ll have them put their hands lightly on top of my hands, especially if I’m trying to give them a core message about how they’re going to have a good day today or what choices they’re going to make.”

It’s a relationship-based reminder to kids that they can actively choose what kind of day they will have by opting to have a positive attitude or by using strategies Richardt has previously shared to manage “big feelings.”

“In kindergarten,” Richardt says, “we sometimes talk about ‘quitting hitting.’ ”

Richardt’s relationship building also extends into the community, where his personal connections have linked him to a new community partner, Bike Springfield, a nonprofit organization that ran a bike safety program at his school.

“I’m hoping they really consider me helpful and come to me with problems.”

Blending both the science and the sociability of relationship-building has had a positive impact on City Connects students, raising their grades and test scores, and boosting their attendance. This is particularly true for students from disadvantaged backgrounds. And Eric Dearing, a professor at Boston College’s Lynch School of Education and Human Development, has found that City Connects also helps immigrant students succeed.

The impact of City Connects approach to relationship is summed up in our 2018 Progress Report, which notes:

“Clarity of understanding and closer collaborations lead to stronger relationships, enhancing the network of support surrounding each student.”

Or as Richardt puts it, “Kids really respond when you show them that you’re giving them your full attention.”