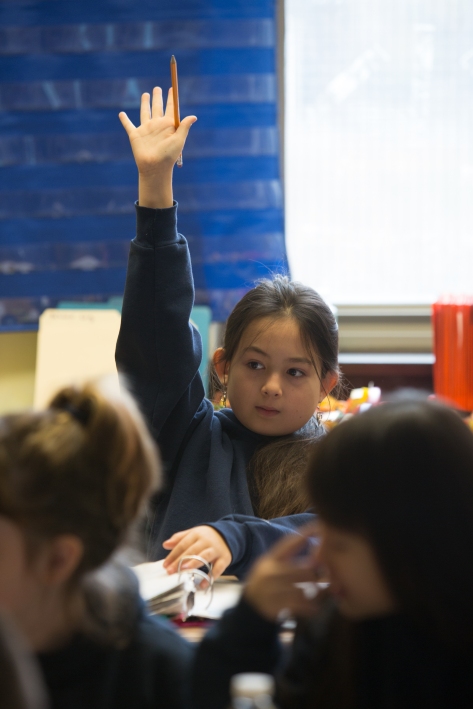 Laurie Acker’s experience with City Connects shows how awareness of students’ needs can lead to action.

“The big ‘A ha,’ that I had with City Connects was hearing that 65 percent of why there is an achievement gap has nothing to do with schools or teachers,” explains Acker, who has worked as both a teacher and a principal in Catholic schools.

That 65 percent statistic comes from research that found the achievement gap is significantly fueled by out-of-school factors. Now, as the Program Manager for City Connects schools in the Twin Cities of Minneapolis and St. Paul, Minn., Acker sees those factors up close every day.

But she also sees how City Connects works with students, families, and community partners to address the many other challenges that children in the Twin Cities face.

A few years later, Walsh proposed to Acker to come to Boston, visit schools, and see how the program is implemented and the City Connects coordinators in action.

“Now when I talk to principals, they say they can’t imagine how the work of addressing the out-of-schools challenges of students got done before they had City Connects coordinators.”

As they do in all City Connects schools, coordinators in the Twin Cities conduct reviews of each child with the classroom teacher and link students to the services and enrichment programs they need to succeed. Coordinators have also supported families with a range of needs. They’ve helped recent immigrants who don’t speak English navigate the healthcare system. They’ve visited the homes of students who have stopped coming to school and addressed the mental health needs of children and parents. They’ve helped an evicted family find housing.

“One student was doing well on standardized tests, but his grades were going down. Anything that he handed in, he got an A on, but he was missing a whole bunch of assignments,” Acker explains. Because this student was sweet and well-behaved, his problems might have been overlooked.

But a home visit revealed a high level of disorganization in the boy’s house. He didn’t always have time to do homework. The coordinator provided appropriate services, helping this student re-engage with his school work.

“Usually it’s the kids who are obviously having a tough time who get help,” Acker says of schools that don’t have City Connects. “But I love that City Connects provides services for all students because a lot of students can just fly under the radar or they need enrichment that they’re not getting. I think working with every, single student and finding services is probably the best thing about City Connects.”

Acker also praises the local City Connects community partners, including Catholic Charities, tutors, and the mental health providers who accept sliding-scale payments. Urban Ventures provides a structured after school program that features time to play, tutoring, and a snack that’s almost like dinner – as well as weekend classes on parenting for adults. And after a teacher saw children taking food from school on Fridays, she realized that they didn’t have enough to eat on weekends, so City Connects brought in Sheridan Story, a nonprofit organization that fights childhood hunger. Now volunteers put bags of food in children’s backpacks on Friday, so they can eat on Saturday and Sunday.

And when you can see students’ problems, you can start to solve them. And that can make all the difference.