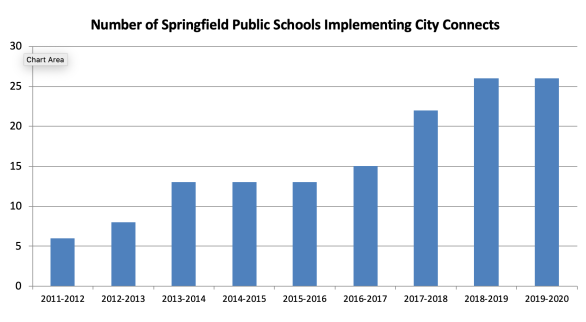 In 2010, City Connects launched in Springfield, Mass., and since then we’ve seen a decade of strong growth in the city.

We recently shared this progress at a meeting of the Springfield Public Schools’ School Committee.

“City Connects and Springfield have a strong partnership,” Anastasia Raczek says. She is the Associate Director of Research & Evaluation at the Center for Optimized Student Support, where City Connects is based. The center is part of Boston College’s Lynch School of Education and Human Development.

“City Connects’ growth in Springfield from implementation at a small scale into a districtwide solution offers a model for other districts considering how to address the non-academic and out-of-school needs of their students.”

Raczek was part of a three-person team that made the presentation to Springfield’s school committee. She was joined by Julie Donovan, Springfield’s City Connects Program Manager, who discussed the mission and implementation of City Connects; and by Jordan Lawson, a Quantitative Analyst at City Connects, who shared research on City Connects’ effectiveness.

Donovan explained City Connects’ growth from six schools in 2010 to 26 schools today to three more schools that will add City Connects, for a total of 29 schools.

“I wanted the Committee to realize that this is a strong student support program that concentrates on the whole child. Plus that the model is proactive and preventative,” Donovan says.

“I also shared the total services delivered last year, 78,000 for 7,532 students,” Donovan says of the presentation. “That’s a huge number that needs to be celebrated. Kids are receiving services that they need because of what we’re doing.”

“I explained that there is one person doing this work, the coordinator. And the coordinator’s focus is to collaborate and communicate with teachers, staff, and families in order to assist the student. Coordinators are proactive and preventative. The City Connects model works because they can often help before there’s a crisis.”

The coordinators also free up Springfield’s school counselors so that they can focus more of their time working directly with students.

“We also have over 156 community partners, which means that a lot of people in Springfield know about and help us do this work.”

Raczek explained the larger benefits of City Connects, explaining that the model has a “lifetime impact” on students, improving their outcomes in elementary school, high school, and in their post-secondary careers.

Lawson shared the research on City Connects, including the finding that City Connects’ students perform better on the Massachusetts MCAS exam.

“It’s a difference in differences analysis,” Lawson explains, “which compares the average change over time between students in City Connects and non-City Connects schools.” This analysis will look at a number of outcomes including students’ grades, standardized test scores, and attendance.”

“We were well received,” Raczek says. “When it comes to understanding students’ success, people appreciate good news backed up by hard evidence.”

One thought on “City Connects: A decade of growth in Springfield”